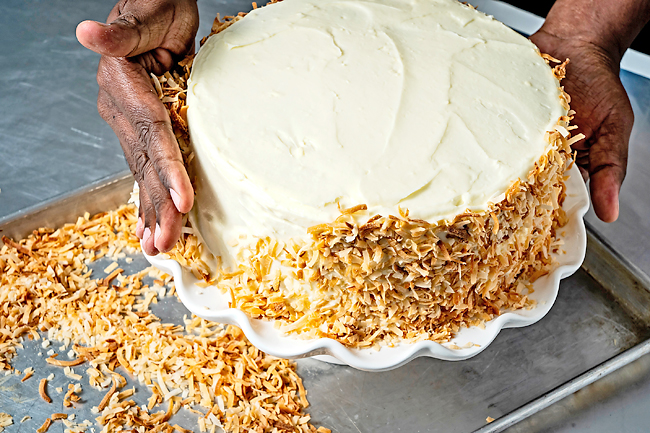 A succulent take on a nostalgic favorite

THE WASHINGTON POST — Coconut cake is highly revered in soul food and Southern cuisines. Associated with celebrations and gatherings large and small – Easter, barbecues and Sunday dinners – it typically features dense, moist layers of white cake coated in frosting and then topped with shredded coconut.

Having existed in some form or fad since at least the 19th century, coconut cake is “nostalgic, but also timeless,” says baker and cookbook author Cheryl Day.

“Especially in the black community, there will be a coconut cake on that table if there is a gathering. It’s one of those desserts that’s held in high esteem,” Day says.

“A big memory for me is the tables where I used to go to see my grandmother and how the cakes were displayed in such grandeur.”

Although she grew up in Los Angeles, Day has spent her summers in Alabama with her grandmother since she was around eight years old, and coconut was one of the first cakes she learned to bake. to cook.

These kinds of layer cakes are “something we are so well known for in the black community,” she says.

“In my family, we always look forward to the person who makes this cake”, because each person’s cake has their own style.

The coconut cake also connects writer and cookbook author Nancie McDermott to her grandmother. Born in the 1880s, McDermott’s grandmother was famous for her coconut cake in the area of ​​North Carolina where she lived, and it’s what she gave each of her four daughters for Christmas. every year a labor of love.

“It’s always been shorthand for special and celebration — I guess because it’s so hard,” McDermott says.

So how did this confection featuring a tropical ingredient — a dessert that evokes feelings of nostalgia and connection for so many — get into the American cake canon?

“Most coconuts belonged to one of two genetically distinct groups. One population traces its ancestry to palms on the coasts of India, the other group descends from palms in Southeast Asia,” wrote Lucas Brouwers in Scientific American.

“Eventually the coconuts made their way to the ‘South American colonies, arriving as whole ripe coconuts on trading ships bringing sugar, spices and slaves from the Caribbean,’ according to Cooking with Coconut. by Ramin Ganeshram.

“Coconut has been a specialty ingredient in American kitchens since colonial times,” McDermott wrote in The Charlotte Observer.

“A recipe for Cocoa Nut Puffs appears in A Colonial Plantation Cookbook: The Receipt Book of Harriott Pinckney Horry, published in South Carolina in 1770.”

The use of coconut as the main ingredient in cakes seems to have come a few years later.

“Coconut cakes have long been associated with the South, and they were baked in New Orleans and Charleston in the early 1800s,” wrote Anne Byrn in American Cake. Toni Tipton-Martin’s Jubliee: Recipes from Two Centuries of African American Cooking cites confection as the prize for cakewalk competitions in the pre-Civil War South.

Here’s how to whip up a delicious coconut cake.

Coconut cake is a staple of southern and soul cuisines, served at celebrations and gatherings large and small. Sometimes it’s as simple as vanilla cake wrapped in shredded coconut, but this recipe also includes coconut milk and oil for a coconut trifecta.

A tangy cream cheese frosting provides some relief to the sweet cake, and you can toast the coconut used to decorate the cake to give it a crispy texture and add a hint of nuttiness.

REMARK: You can also bake the cakes in two nine-inch pans, but the layers will be a little shorter and you may need to reduce the baking time.

INGREDIENTS FOR THE CAKE

Make the cake: Place a rack in the middle of the oven and preheat to 350 degrees. Coat two eight-inch cake pans with cooking spray, line the bottom with parchment paper and set aside.

In a medium bowl, sift together the flour, baking powder and salt. In a two-cup liquid measuring cup or small bowl, combine the coconut milk and vanilla extract.

In the bowl of a stand mixer fitted with the paddle attachment – ​​or, if using a hand mixer, in a large bowl – combine the sugar, coconut oil and butter. Beat on medium speed until light and fluffy, 3 to 5 minutes, stopping to scrape down sides and bottom of bowl to make sure mixture is evenly creamy.

Reduce mixer speed to medium-low and add eggs, one at a time, beating until each is emulsified into batter before adding another. Scrape sides and bottom of bowl as needed, and after adding last egg, mix until no streaks remain, but no more than 20 more seconds to avoid injecting too much air in the dough.

Add the rest of the flour mixture and mix until some of the flour mixture remains unincorporated. (The order is dry-wet-dry-wet-dry.) Remove the bowl from the mixer, add half a cup (45 grams) of shredded coconut and, using a rubber spatula, fold the dough, making sure it is evenly mixed and there are no dry pockets of flour mixture or lumps remaining. Do not overmix or your cake will be dense and tough.

Divide batter between cake pans; each mold should contain approximately 750 grams of dough.

Using a small spatula or an offset spoon, level the batter in each pan. Grasp each mold by the edge on opposite sides, lift it about three inches, and drop it on the counter two or three times to release any large air bubbles. Bake for 35 to 45 minutes, or until a cake tester or toothpick inserted in the middle of the cakes comes out clean. (If you plan to toast the coconut, leave the oven on.)

Let the cakes cool in their pans on a wire rack for 20 minutes, then run a thin knife or spatula around the edge and gently invert them onto a wire rack. Remove pans and let cakes cool completely, upside down (at least two hours), before frosting.

Toast the coconut (optional): While the oven is still at 350 degrees, spread the remaining coconut on a large parchment-lined rimmed baking sheet and bake for six minutes, or until hot. until golden brown, stirring every two minutes.

Prepare the frosting: In the bowl of a stand mixer fitted with the paddle attachment – ​​or, if using a hand mixer, in a large bowl – combine the cream cheese, butter, vanilla and salt. Beat on medium to medium-high speed until well blended and frothy, about one minute. Turn off the mixer and add a cup of icing sugar. Starting at low speed and increasing to medium, beat to combine, then turn mixer off.

Add the remaining icing sugar, about a cup at a time, and beat, starting on low and increasing to medium, until the frosting is fluffy and well blended, 1 to 2 minutes, scraping up the sides and bottom of bowl as needed. Cover and refrigerate icing until ready to use, if needed.

Assemble the cake: If the frosting has hardened, beat it briefly, by hand or using the paddle of your mixer, until it is frothy and spreadable. Spread a layer of cake on a plate or tray and top with a cup of frosting.

The best chocolate cake I’ve made without a pan

Check out these 6 diabetic-friendly sweet treats to appease your cravings! –…