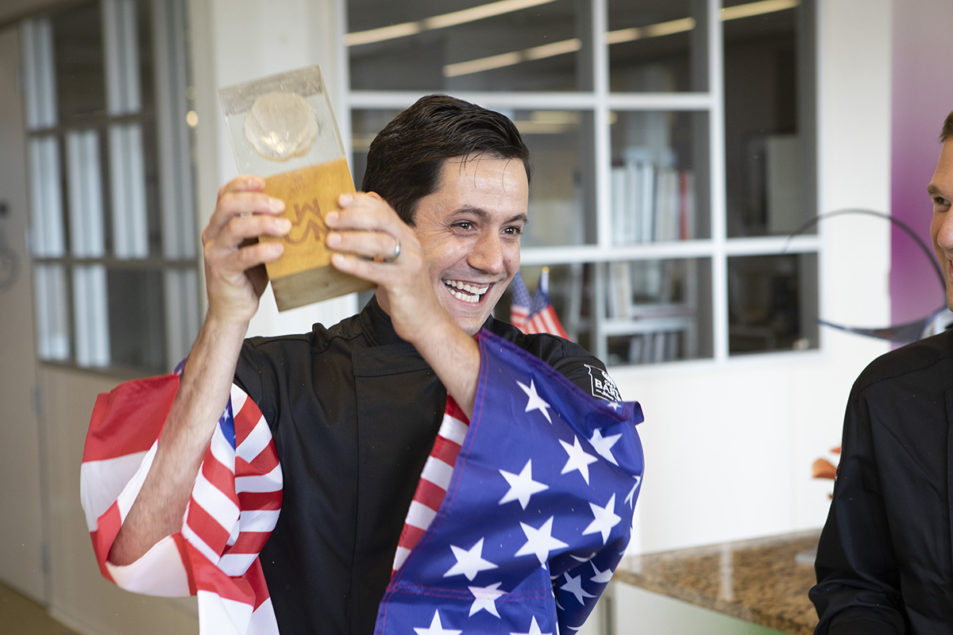 The Chocolate Master Heads to the World Stage

Chef Christophe Rull has been selected to represent the United States of America at the World Chocolate Masters. The competition, created by Cacao Barry, owned by Barry Callebaut, the world’s leading manufacturer of high-quality cocoa and chocolate products, will take place in October 2022 in Paris, France.

Chef Rull brings with him over 20 years of experience as a pastry chef on The Sugar Geek Show, reality TV chef on Netflix’s Bake Squad and baking instructor at ST Pastry School. He was selected because of his creativity and determination – taking up the theme of the 2021 North American national selections and sharing his visions of what the prospects of tomorrow would be like if the ocean, humanity and cocoa did not exist not.

“To me, #TMRW is about protecting the ocean because without the ocean there is no humanity,” Chief Rull says of his vision. “When we go to the moon, the first thing we look for is a source of water, so for us to have a tomorrow, it’s going to take humans preserving the ocean and finding a way to minimize the use of plastic and of items that pollute the ocean and ultimately our plates.

The World Chocolate Masters competition is dedicated to pushing the boundaries of chocolate creativity. It’s the ultimate opportunity for future chefs around the world to share their chocolate talent and connect with fans, professionals and industry leaders around the world.

The theme for the eighth edition was born out of the gap between apocalyptic visions and the rise of a bright new optimism. The theme, Masters #TMRW_TASTES_LOOKS_FEELS_LIKE_, embarks on a journey that invites chefs to explore entirely new expressions of chocolate. It’s not about far into the future, but about tomorrow and how future pastry, chocolate and hospitality chefs will reinvent the pleasures of tomorrow. Create recipes that celebrate the health benefits of cocoa and rethink design formats such as a pastry, snack or candy.

The American Selection was a two-day event where competitors had to create the following:

At the event in the United States, Chief Rull interpreted the theme and each mission looking at the ocean and teaching the importance of protecting it, because as he says, without the ocean, humanity ( and cocoa) would not exist.

“The ocean makes up about 70% of our planet, from climate distribution to carbon dioxide absorption, transport, life cycle and food. Today, global warming and plastic pollution are greatly affecting the health of the ocean and it is necessary to protect it. Without the ocean, humanity would not exist and therefore cocoa.

“The ocean is loaded with plastic waste which becomes micro-plastic and mixes with plankton. This plankton is eaten by fish and ends up on our plate. The manta robot is a machine that will clean up the ocean, collect plastic and turn it into renewable energy.

“The California coast is surrounded by reefs and wild fennel grows everywhere all year round. The creamy chocolate Cacao Barry Alto el sol imparts a rich flavor of dominant acidity and red fruits that pairs perfectly with the raspberry, and the floral aspect of the wild fennel leaves a fresh palate towards the end of the tasting. I wanted to use local produce (fennel) and represent the ocean through a handmade reef plate in collaboration with a local pottery artist, Michael Totah.

“Vegan and quick service/portable snack. Quick snack boost to recharge energy, suitable for morning or afternoon. I’m a big coffee drinker and I love hazelnut gianduja. I wanted to pair the perfect drink with these chocolate hazelnut cookies bringing a hint of acidity with the passion fruit curd (cleansing/refreshing) in the middle.

“Citrus grows all over California, the tartness of Meyer Lemon Marmalade and the floral scent of kaffir lime balance perfectly with the roasted, authentic flavor of pistachio gianduja. In this candy, you will have three chocolate characteristics : Cacao Barry Zephyr white couverture helps bring the luminosity of vibrant colors inspired by the ocean kelp forest and ripples of water drops Cacao Barry Lactee Superieure milk couverture will heighten the roasted feel of gianduja. Cacao Barry Extra Bitter Guayaquil dar couverture will bring a note of strong cocoa flavor and bitterness.The driftwood top represents the flow of ocean waves.

Chef Rull is excited for his next opportunity and plans to bring everything he has to the competition.

“I’m going to go for it 100%. Try to find a balance between being focused on competition and living a healthy lifestyle. I want to make sure I look my best,” Rull says of next year’s World Chocolate Masters. “I need to step up my game and surround myself with inspiring people who are experts that I can learn from. I want to keep growing in my craft.

Christophe Rull has over 20 years of experience as a pastry chef. Born and raised in France, he began his culinary career at the age of 16 in a Michelin starred restaurant (Abbaye de St Croix) in the south of France. After 5 years of apprenticeship, Chef Rull continues his career in Michelin-starred restaurants such as Le Richelieu and Les Roches Fleuries.

In 2008, he continued his career as Chef de Partie at La Maison de Marc Veyrat, a 3-star Michelin restaurant, before joining the prestigious ENSP Pastry School as an Assistant Pastry Trainer. In 2009, Chef Rull was part of the opening pastry team at the Aria Las Vegas Hotel & Casino before being promoted to assistant executive pastry chef at the MGM Grand Las Vegas. In 2016, Chef Rull’s expertise landed him a position as executive pastry chef at the luxury property Park Hyatt Aviara where his tenure lasted 5 years.

Since moving to the United States, Chef Rull has participated in several professional competitions such as Pastry Live in 2014 and 2015, where he was awarded Best Artistry in Showpiece as well as Best Chocolate Showpiece in 2014. In 2017, he won season 7 of Halloween. Wars on the Food Network and in 2018 won the title winner for Food Networks Holiday Wars. More recently, Chef Rull was part of the cast of the reality show Bake Squad on Netflix.

The story of “Baci”: Europe’s most romantic chocolate turns 100