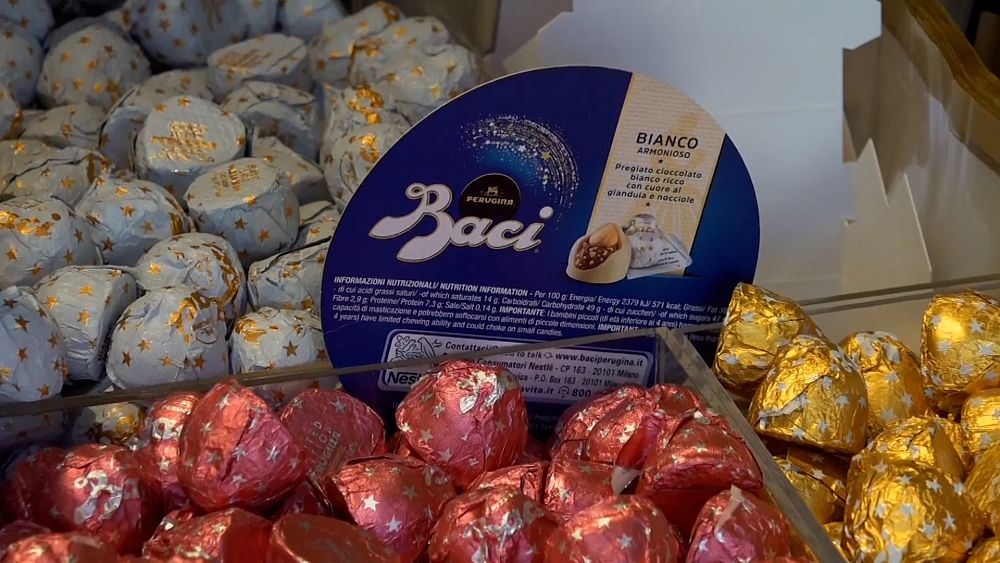 The story of “Baci”: Europe’s most romantic chocolate turns 100

If you have ever enjoyed the Italian taste Chocolates wrapped in a little love note, it was probably ‘Baci’.

The global Valentine’s Day favorite celebrates its centenary in 2022.

Meaning “kiss” in English, Baci was established in 1922 in Perugia, Italy, by Luisa Spagnoli, a confectionery entrepreneur.

The company that produces them, Perugina, attributes their success in large part to their creativity and ambition.

After all these years, the chocolate recipe remains the same: dark chocolate, gianduia, chopped hazelnuts and crowned with a whole hazelnut.

Unless, of course, you’re looking for a limited-edition century-old chocolate, courtesy of Dolce and Gabbana.

Delicate but indulgent, the fashion house has collaborated with Perugina to create a celebration collection with a limited edition recipe, whose lemony heart is coated in white chocolate.

A chocolate love affair with a rich history

According to Perugina, which was sold to Nestlé in 1988, Spagnoli set her sights on creating a new chocolate with a unique shape, which she said resembled the knuckle of a clenched fist.

At first, she called him “Cazzotto” (meaning “punch” in Italian).

“Can you imagine,” he allegedly said to Luisa, “walking into a store and asking the salesman for a punch?”.

He came up with a more romantic name, and the chocolates were called “Baci,” which means kisses.

Spagnoli’s creativity and ambition set the wheels in motion for a real Italian Treasure.

It was the beginning of what was to become a fascinating story of one of the world’s most well-known romantic food gestures.

That being said, Baci’s famous love notes weren’t his idea and the chocolates didn’t originally accompany them.

A few years after the birth of the Baci, Federico Seneca, artistic director of Perugina at the time, decided to include something unique in the wrapping paper for which the chocolate had become famous.

To this day, the little words of love remain, translated into several languages.

Spagnoli was a true confectionery pioneer

Spagnoli not only invented Baci, but also created his own fashion house that bears his name and one of the big names in Italian fashion.

“Spagnoli’s role is extremely dynamic, a pioneer of what will become female entrepreneurship,” says Cristina Mencaroni, director of the Perugina Historical Museum.

“It was strange enough to find a woman on the board of directors of a company, let alone to find one who took care of the innovative aspects, the recipes, the products, the activity concerning the products, but she was an ingenious entrepreneur with a very modern mind.”

Millions of chocolates produced every year

The Perugina factory produces many brands, including “Kit-Kat”, but none more famous than the hazelnut candy – 80 million are individual Chocolates are created each year for global consumption.

The large machines make nearly 2,000 Baci every minute for eight hours a day.

“Production continues six to seven months a year, so you can imagine how many are reaching our consumers,” says factory manager Marco Muratori.

Meanwhile, chocolate was an important aspect of life in Spagnoli’s native Perugia. There are shops to explore and even a restaurant called ‘Bacio’ on the main street of the charming hilltop town.

While not exclusively for lovers, Baci hopes the old but goldie packs a punch, and maybe a kiss, this Valentine’s day.

Watch the video above to learn more about the 100th anniversary of chocolate.

The Chocolate Master Heads to the World Stage